Tim Berners-Lee with a thought-provoking keynote address launched the First Web Science Conference at the Foundation of the Hellenic World in Athens earlier today. Here are the notes I took during his speech. 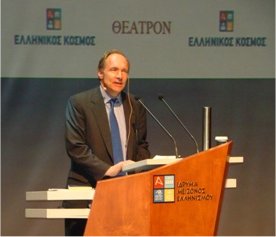 People often ask Sir Timothy what made him create the web in the first place? What made him work on it was frustration. When he was working at CERN, scientists from all over the world were working together assembling hugely complex machines. These scientists were using incompatible computer systems; it was therefore very difficult for him to gather the information he needed to do his job. He then realized he wanted an information system that could link all data into one seamless whole, and wrote a memo describing his idea. He had to write a memo rather than software, because CERN was trying to dissuade people from writing software. The reasoning behind this policy was that if you allow creative people to write software, then they will spend all their time writing software, because this is so much fun! The memo was written on March 1989. Months passed and nothing happened.

A year later Sir Timothy resubmitted the memo to his boss, adding ",1990" after the year on the memo's date. This time his boss asked him to write the software, and they decided to develop it at the, shiny at the time, NeXT machine, because it had a very good software development environment.

A key engineering decision in the web's design was to allow for dead links: references to pages that didn't exist. This was extremely important, because otherwise the web wouldn't scale. The web took off through a community of people. At each of the talks he gave there would be a couple of people announcing they would put up a web server with some documents or pictures. From those modest beginnings the interest on the NeXT web server quickly reached a point where the number of pages fetched was multiplying by a factor of ten each year. The first newspaper that noticed the web was (predictably) The Economist. Heads of state and other notables (equally predictably) followed.

The important thing about the web is that it's only one web; there is not an academic and a commercial web, there is not a high-quality and low-quality one. Every time you try divide the web you destroy it. The web works through its universality.

The internet was initially resisted in Europe. Tim Berners-Lee was lucky to be at CERN when the internet was getting accepted in Europe. An essential part of the web's growth has also been CERN's decision not to charge royalties for web technologies; a direction that was later adopted by the W3C.

The talk then switched from the history of the web to web science. The neurons in your brain go down every time you have a glass of wine, but the number of web pages increases every minute. If you could put the web in front of you, you would find it has a very complex structure: it would be quite tangled and with many links. Although there is a science of the brain, cognitive science, Sir Timothy noted that there was no science of the web, and this was the reasoning behind the formation of the Web Science Research Initiative (WSRI). Web science is important, because a difference between the brain and the web is that the brain has evolved into a state we now regard as a given, whereas we have designed the web. If the web misbehaves it's our duty to find the problem and fix it.

There is not reason to doubt that technology will continue to advance, and that the rate of change will continue to speed up. This happens, because each time we can build on existing layers: think of telephony, modems, the internet, and the web.

There are two important areas of development for the web. One is the mobile web. This is not so much important for executives browsing the web in a meeting, but for people in the third world for whom their mobile phone could be their only connection to the web. The second, is that in addition to documents we should also put linked data on the web: linked open data. Such data can be combined into new applications and form the basis for important science. Even if we can see the data as a web page, this is not what we as scientists want; we want the raw data. Data should come from all possible sources: government, health, science, education, industry, finance, and other fields.

Eighty percent of the world doesn't use the web. In many areas there is no phone signal, or people can't afford a subscription, or the phone doesn't have a web browser, or the browser doesn't support their language's character set, or they aren't interested to join a US-centric social network. For this it's important for people all over the world to be able to setup their own web server. Perhaps in a small remote village, running from water power, and allowing the formation of a social network with other nearby villages. This is something that people creating web-related technology should have in mind, and that web science, through the Web Foundation is trying to make happen and explore.