What happens to the power grid when millions of people turn of their lights? I had a chance to study this during tonight's Earth Hour: an international event organised by the WWF, which asks households and businesses to turn off their non-essential lights and electrical appliances for one hour to raise awareness towards the need to take action on climate change.

I studied how the grid and the power generation facilities fared by monitoring the line's voltage through a server's UPS, which I set to take a voltage measurement every 15s. At 2V the resolution of the measurements turned out to be quite crude, but the results were nevertheless interesting. Earth hour took place from 20:30 to 21:30, and the chart below illustrates the voltage fluctuations before, during, and after the event. 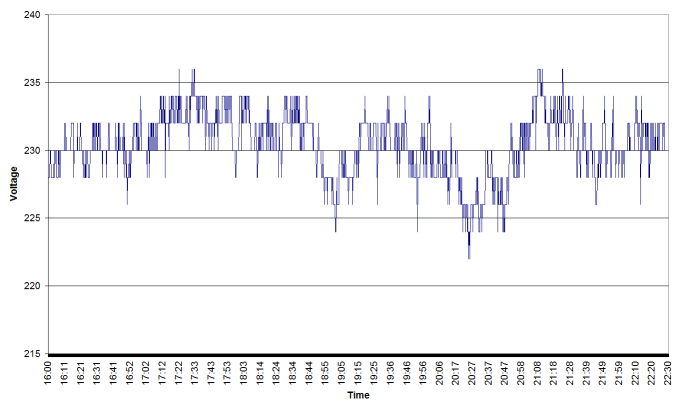 The values illustrate the opposite of what I was expecting. I thought we would see a rise in voltage at 20:30 as people switched off their lights and load was removed from the grid. In fact, we see that by 20:27 the voltage fell from its nominal 230V value down to 222V. I guess, the power company preemptively removed power generators from the grid in order to avoid a voltage spike by the sudden load reduction at 20:30. To be honest I was expecting more dramatic fluctuations. I compared my readings with those from a previous Saturday whose log I had at hand (2009-02-7 — see below), and today's voltage fluctuations do not seem to be extraordinary. Either the Greek Public Power Corporation and the Regulatory Authority for Energy did a very good job at managing the changes in demand, or the participation in the event didn't make a big difference. 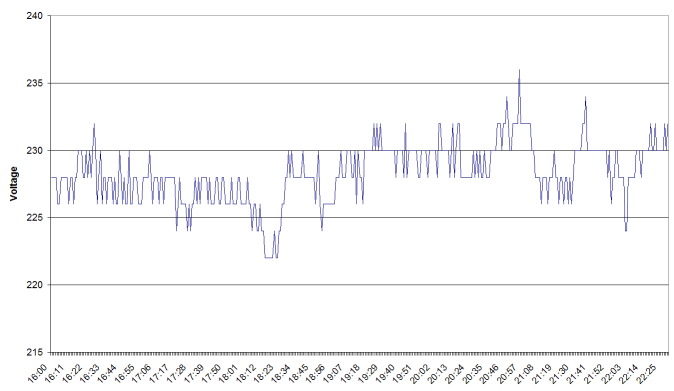 Although the purpose of this event is symbolic, I was interested to see the savings in CO2 emissions we achieved. Let's assume that the 8V voltage drop I saw before the event's beginning corresponded to a correct assumption by the power company of the actual demand drop during the event, and that the drop was the same throughout Greece. Then, this 3% drop over the 12.76GW installed production capacity is 380MW of power, or 380MWh of energy over the event's duration. According to the EIA's Carbon Dioxide Emissions from the Generation of Electric Power in the United States report, coal-generated electricity emits 2.095 pounds CO2 per kWh, which makes the event's savings for Greece equal 361 metric tons. The figures I arrived through these back-of-the-envelope calculations are in the same orders of magnitude as the ones officially reported. Not bad, taking into account the many assumptions and simplifications I made.