Language is a very powerful way to describe behavior. Therefore even when I create pictures, instead of dragging around my mouse, I use declarative tools like GraphViz, gnuplot, and UMLGraph. These allow me to describe what I want to draw, instead of how I want the end-result to look like. The truth however is that the end-results are not always perfect. Today I realized that the state of the art has advanced to the point where I can create the drawing declaratively, and then visually polish the final drawing.

Here is an example. For an IEEE Software special-issue on development tools that I'm co-authoring we wrote a table listing the introduction date and level of abstraction of various tools. Here is an excerpt (I'm using an early draft version of the data).

I then wrote a small awk script to convert this into gnuplot. This created a chart like the following. 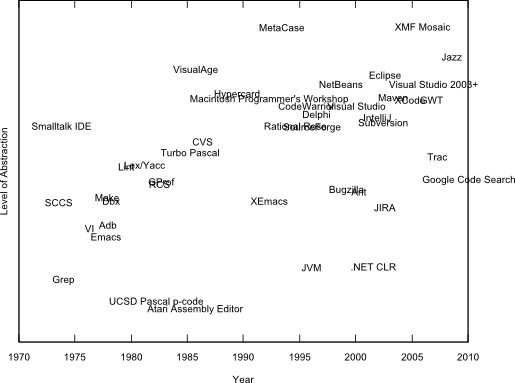 As you can see, despite the random pertrubation I introduced, many of the labels overlap. (Surprisingly, Excel 2000 can't create such a chart without either entering each label by hand, or adding a third-party add-in.)

However, I then loaded the resulting SVG file into Inkscape. It loaded perfectly, and I was thus able to easily adjust the labels' positions using the mouse. Here is the result after the fine-tuning. 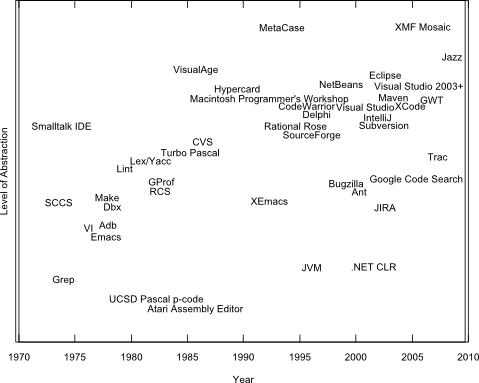