A Visit at BMW's Leipzig Factory

Yesterday I had a chance to tour the BMW Leipzig factory. It was a unique experience, in which I witnessed the sophistication of modern production methods, and the most well-organized complex human undertaking I have seen first hand. The factory literally runs like a clockwork, eerily bringing to my mind the descriptions of Mars's factories in Bogdanov's science fiction novel Red Star.

The plant, established in 2005, is BMW's newest and most modern plant. The 45 ha factory lies on a 208 ha area, and is divided into three areas. Separate, but attached, buildings are used by important partner firms. These supply parts directly through the factory's one-rail transportation network.

The factory started its production in 2005 with the 3 series. Current production consists of four different car types: the 1 series (the three door, the coupe, and the convertible versions) and the 3 series sedan. In total 5200 persons work at the factory. About 2200 are BMW employees; the rest work for the co-located suppliers. Many workers were hired while the factory was still being built in order to be trained. Around 30% of the workers were jobless when they were hired. The production can range up to 700 vehicles per day. The factory works on two shifts Monday to Friday. The weekends are used for setup and maintenance. Painting takes longer, so three shifts are used there.

The building is designed so it can be extended around a central axis. Moreover the assembly line follows a so-called "finger" layout where cars follow on what looks like the fingers of a hand. These "fingers" can in the future be extended outward to handle more complex production tasks, or (I'm not sure how) increase production. The plant's location was carefully selected to be close to transport infrastructure. The plant has a direct connection to the rail network, and about 20% of the cars leave by rail. The are 500 incoming lories per day, supplying 10000 m3 of materials. In total it takes 38 hours to build a car: 10 for the chassis, 17 for painting, and another 5.5 for the final assembly (I know, the numbers I noted do not add up).

The chassis production area covers 80000 m2. Chassis parts are no pressed at this factory, but are delivered from other factories that have steel presses. It is planned to install a steel press in this factory in the future. The chassis for each model is identical; there is no differentiation by configuration (apart from adjusting for convertibles), thus simplifying production and planning. 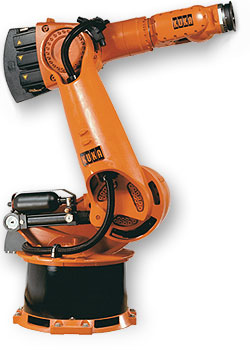 Chassis production is handled by around 700 six axis robots, similar to the one shown in the picture. These take the parts, put them together and then weld them, either by a welding assembly they hold, or by passing the parts through an external welding press. You can see some robots in action in this YouTube movie. The movie shows a different factory, because in it the transport occurs on the floor level and the robots are moving slower.

Each task is timed to last 70 seconds. Sometimes two or three robots collaborate for a given task. My impression was that a lot of the work involved moving parts around. All robots consist of an identical six-axis "arm" supplied by KUKA and a so-called "handling" assembly designed and built by BMW. A handling assembly can contain tools for gripping parts, welding, or painting. A single handling assembly can contain multiple tools. In the assembly area I even saw an assembly with a tool for applying temporary duct tape to hold the car's glass windows. A large workshop adjacent to the chassis production floor is responsible for building (and I suspect also designing) the handling assemblies.

The chassis production uses a unique transport system. Instead of having parts transported on the floor level, all the parts are transported on a separate overhead level, and are brought down using automated elevators. This results in a cleaner and safer production floor. Work areas are fenced around and laid out in a clean grid structure with corridors around them. The (very few) maintenance workers can easily move around them.

In all, I don't think I saw more than 5 workers among the 700 robots on the production floor. Their main task seems to be to clean the tips of the welding presses. A worker performed welding quality control by inspecting welding samples with an ultrasound device. Another task handled by humans is the mounting of the doors to the chassis. This is done before painting, so that all the bodywork will have exactly the same color. It turns out that humans are better at exactly adjusting the positions of the doors to match the rest of the car body.

The main building is designed by the brilliant British Iraqi architect Zaha Hadid. The design of the office space reflects the organizational idea that there should be no separation between managers and others lower in a hierarchical chain. All workers are situated in a way that simplifies communication. All work areas are open and accessible to everybody to further increase communication. The only areas that are enclosed (for health reasons) are the kitchen and the medical facilities. However, the kitchen is still visible through a huge glass window on one of the main corridors. The building lacks 90 degree angles. The main materials are concrete, steel, and glass. The concrete is cast on a wooden mould so that the wood's surface can be seen on the bare concrete walls.

On the top of the building, near the ceiling runs a conveyor moving around the blue-lit chassis of cars. This looks nice, but it is also functional, because it acts as a buffer between chassis production and painting. The building has no artificial climate control, using the windows (and I suspect sunlight) to control the temperature. This minimizes costs, and also keeps the building's temperature close to that of the other buildings thus avoiding the exposure of personnel to a climate shock as they move from the production buildings to the central building. An area of the central building is used for putting the finished cars on display so that office workers and managers can inspect them first-hand.

Painting is done in four stages. In total about 9kg of paint are applied on a car area of 100m2. In total the painting process lasts 17 hours. First the cars are thoroughly cleaned by putting them into a bath and rotating them around their main axis, so that the cleaning solution can reach all parts. Then a protective paint is applied, which shields the body from corrosion. This is applied in a bath through (I think) an electroplating process. The other layer are applied through spraying or powdering by the ubiquitous six-axis robots. About 40 robots are used in the painting process. For spray painting the robots are clad in red duct-taped protective clothing.

During painting the robots also handle tasks like the opening and closing of the doors. The gas tank cover is given the same color by attaching it to the driver's window (visible in the picture). Cars of different types flow on the production line. In front of each car lies a tablet indicating its type. Robots read the type, in order to follow the appropriate painting process.

The next layer is the primer for the main color. This matches the final color. Color selection is made statistically, based on average demand. For instance, in the last two years demand for white cars has risen from 2% to 10%. The final paint layer is applied using an electrostatic process. The chassis is given a negative charge, and the paint nozzle charges the paint positively so that it gets attracted to the car body.

The painting area is kept clean of dust (employees and visitors don protective clothing) and is climate controlled to a steady temperature of 18-24 C.

Surprisingly, the painting rooms are squeaky clean. No paint is allowed to go to the glass windows, the walls, or the robots by maintaining a constant air draught from the ceiling to a grill on the floor. Underneath the grill is a waterfall that collects the paint. Paint is not manufactured by BMW but is supplied by companies like Dupont.

After the main paint a protective layer is applied. This serves to keep the paint shiny by protecting the paint from scratches and from the weather elements. Uniquely, the protective layer is applied as white powder. This minimizes material loss, because powder that falls off is collected and reused. Again, the powder is attached to the car body through an electrostatic process. The body is then heated to 140 C and the powder becomes shiny and transparent.

The next step involves workers who manually inspect the chassis paintwork and body surface for imperfections and repair them by hand. There is no time limit on this process. The area where they work is brightly lit, and they look around and hug a car's body until they are satisfied that it is perfect. The floor of this area is wooden to make this work, which is performed mostly standing up, less tiring. Finally, the cars are polished using Emu feathers. Apparently no synthetic material can match their quality for collecting dust particles.

The assembly line has a total length of 2.5km. Workers use bikes to move around it, while materials move around using driverless carts automatically propelled around the factory floor through induction rails mounted underneath the floor. These can be easily readjusted making production a lot more flexible.

At the start of the assembly line each car is stamped with the chassis number, obtaining its personality. Not two cars produced in a year are the same, and almost all cars are built to order. Customers can change their specifications up to six weeks before delivery. Therefore, at the start of the production line each chassis is mounted with an (I think) RFID chip that uniquely identifies the car to be built. The same information is also printed on a sheet that is pasted on the car. The assembly consists of 283 steps, each lasting 80 seconds. The total assembly process lasts 5.5 hours. There is enough buffer time in the work of each step so that workers can adjust their pace without being pressured. Workers are allowed to move around to different work tasks for which they are qualified.

Each car chassis lies on a table that can vertically shift it. This provides easy access to all car areas. The table lies in turn on a wooden floor (again for worker comfort) and the wooden floor moves along the production line. This allows the workers to move with the floor.

On the line various car models and configurations flow intermixed. Materials arrive to the assembly point matching each car. For instance, a conveyor belt brings to each car a bag containing its cables. These are made by a co-located supplier and match exactly the car being assembled. Workers unpack the cables from the bag and fit them in a number of 80 second steps. Motors are delivered ready-made to the factory from plants in Austria and the UK. The building of the highest-powered motors is jealously kept at the company's base in Munich.

At the 2.5km of the assembly line a robot fills the gas tank, and, 38 hours after the first welding was put in place, a driver steps into the car for the first ride. The last 300 meters of the 2.8km assembly line are devoted to testing all aspects of the car. Furthermore, around 10% of the cars are taken around for a drive by experts (at moderate speeds of up to 130km/h, I was told) who can spot welding problems by the car's sound.