The Thomson Reuters Web of Knowledge has published the 2012 Journal Citation Reports. Following similar studies I performed in the past six years (2007, '08, '09, '10, '11, '12) here is my analysis of the current status and trends for the impact factor of computer science journals.

Let me start with an overview of the method I followed. I performed my analysis on the 467 journals appearing under the Web of Knowledge's computer science subject categories: artificial intelligence; cybernetics; hardware & architecture; information systems; interdisciplinary applications; software engineering; theory & methods. Note that journals may appear in many categories. In particular, there are many overlaps between the above categories and "electrical and electronic engineering" and "operations research and management science".

Don't take this report too seriously. The impact factor is notoriously prone to misuse; let's not make the situation worse. Also note that in computer science there are tens of prestigious conferences. For a ranking of these conferences you may wish to consult the Conference Ranking Exercise performed by the Australian Government's, Excellence in Research for Australia body.

Journals with the Highest Impact Factor

The first two journals in this list are surprising: neither I nor colleagues I talked to would expect them to be ranked so highly. Read more about this after I've presented all results from this year.

From the journals that were added to the JCR I find it notable that two journals from China-based publishers entered the list: Frontiers of Computer Science, published by the Higher Education Press (Beijing), and the Journal of Zhejiang University: Science C: Computers & electronics, published by the Zhejiang University Press (Hangzhou). Two other trends apparent from this list are bio-inspired computation (Natural Computing, International Journal of Bio-Inspired Computation, Swarm Intelligence) and user interfaces (Journal on Multimodal User Interfaces, Pervasive and Mobile Computing). I was also happy to see in the list The R Journal, published by the R Foundation for Statistical Computing, which covers the R free software environment for statistical computing and graphics.

Journals Dropped from the JCR in 2012

I was surprised to see three journals with a 2011 impact factor above two being dropped from the list: Knowledge and Information Systems: KAIS, Mobile Information Systems, and IEEE Transactions on Neural Networks. I've heard that Thomson Reuters harshly punishes journals that are found to be trying to manipulate their impact factors. Could this be such a case?

Journals with the Highest Increase in their Impact Factor

Journals with the Highest Decrease in their Impact Factor

From the journals with the highest decrease in their impact factor notable is ACM Computing Surveys, which continues its 2012 drop of 3.2 points with another drop of one point to a still highly-respectable 3.5. It remains to be seen next year if this is just a reversal to the mean, as I posited last year, or it is a continuous trend.

Citations to the Two Highest-Ranked Journals

Digging deeper on how the two highest-ranked journals have gathered so many citations yields some surprising findings. A look at the author institutions of articles that cite papers in the Enterprise Information Systems reveals that 57% of them are from the Old Dominion University. 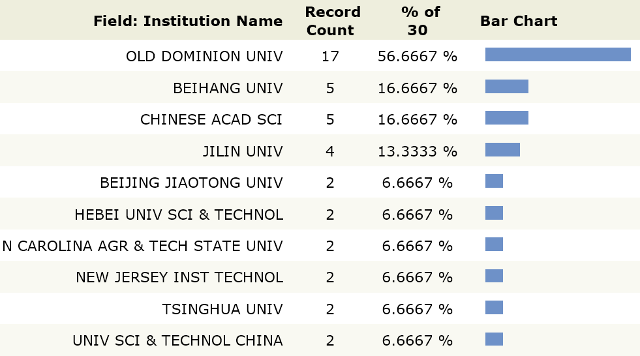 This is the workplace of the journal's Editor in Chief; there are many explanations on the relationship between the two facts. 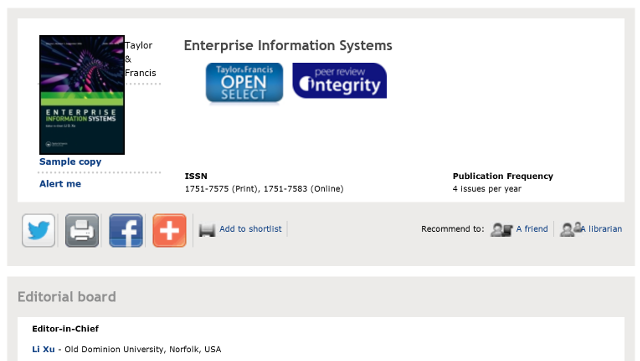 This is an open access journal that has published 715 articles in the first half of 2013.