Changes in the Way we View Computing

The Association for Computing Machinery recently released the 2012 version of the ACM Computing Classification System (CCS). This is the work of 120 volunteers and marks significant changes over the previous version, which was released in 1998. To create it the volunteers mined ACM Digital Library search terms and used the services of a specialist company that creates ontologies. To see what has changed in the past 14 years in the way we view computing, I used Wordle to create word clouds from the 1998 and the 2012 versions. Here are the two views of our discipline's Zeitgeist and my take of their differences.

The 1998 Version of the ACM Computing Classification System 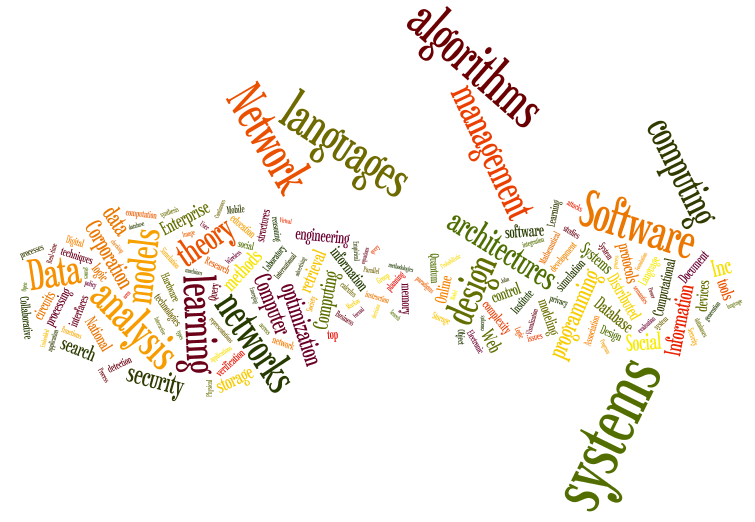 The 2012 Version of the ACM Computing Classification System

The first interesting fact is that the 2012 version is more concrete than the 1998 one. The "Miscellaneous" and "General" terms are gone. According to ACM the classification will be updated in 2014, so with more frequent updates there's probably less need for such catch-all categories. In addition, the new CCS contains numerous proper nouns: companies (from Accenture to Zilog), organizations (from the American Mathematical Society to the Wikimedia Foundation), people (from A. van Wijngaarden and Ada Lovelace to Vannevar Bush), and rag bag of technologies (from ActionScript to ZigBee). Confusingly these are not alphabetically listed. Again, these concrete terms lessen the need for the "miscellaneous" category.

Many terms appear in the two CCS versions with different sizes. This reflects their relative frequency and, therefore, importance in the published research. The terms in the 2012 CCS version that appear more frequently than in the 1998 one are: software, network, algorithms, data, architectures, models, and management. In contrast, the terms in the 1998 version that are not featured prominently in the 2012 one are: methods, distributed, information, and programming. Finally, there are terms that seem to hold their ground across the two versions: design, analysis, systems, and languages. You might want to take these findings into account when choosing research topics.