How do Big US Firms Use Open Source Software?

We hear a lot about the adoption of open source software, but when I was asked to provide hard evidence there was little I could find. In an article I recently published in the Journal of Systems and Software together with my colleague Vaggelis Giannikas we tried to fill this gap by examining the type of software the US Fortune 1000 companies use in their web-facing operations. The results were not what I was expecting.

Let's first start with the method we used. How do you convince the US 1000 largest companies, which cover almost half of the US corporate revenues and profits, to share with you details about what browser or server they use and the operating systems these run on? In our research we didn't ask, we set out to find by ourselves using a number of techniques.

In a summary, our results show that the adoption of OSS in large US companies is significant and is increasing over time through a low-churn transition, advancing from applications to platforms. The adoption of OSS is a pragmatic decision influenced by network effects. The adoption is likelier in larger organizations and is associated with IT and knowledge-intensive work, operating efficiencies, and less productive employees. Let's expand on these findings.

For more than 70% of the companies we found at least one observation of an OSS browser, and for for a quarter of all companies all data were for an OSS browser. The percentage of the companies of our sample using an open source browser during the period 2006–2008 rose from 52% to 70% to 76%, while the percentage of those using an open source operating system rose from 15% to 19% to 24%. We also found that it is more likely for a company that uses an OSS browser on one year to start using an OSS operating system the next year, signifying that OSS adoption progresses from applications to platforms. Predictably we also observed disjointed network effects: companies prefer to use either OSS products or proprietary ones. However, the distinction is not absolute; we also found that organizations will mix and match OSS and proprietary products as needed.

Looking at the types of organizations that adopt OSS we found that companies using an OSS system have significantly higher revenues and assets than users of proprietary systems. These facts probably indicate that OSS adoption is driven by economies of scale and scope, and that it is also associated with better performance. Furthermore, we saw that an industry sector's IT capital stock share was positively correlated with its OSS adoption ratio, indicating that the adoption of OSS benefits from a high intensity of IT usage as measured through the IT capital stock share. As you can see in the Figure below, OSS adoption is rising with surprising regularity from the diagram's left to the right as a company's focus moves toward the consumer presumably commanding a higher intensity of IT usage. 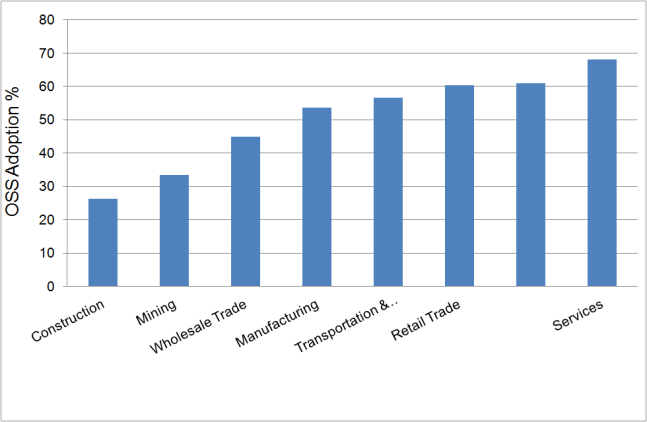 Interestingly, we also observed statistically significant differences on gross margins and (positive) profits between users and non-users of OSS. The causation here could work in both directions: companies that adopt OSS achieve higher profits through its lower cost, or well-run highly profitable companies tend to adopt OSS. In contrast we found that companies using an OSS system have significantly lower dynamic financial indicators (capital spending and sales growth) than those using proprietary systems; i.e. that OSS adoption thrives in stable environments. Finally, we also found that organizations with knowledge-intensive workers are apt to adopt OSS, but also that OSS is more likely to be adopted by large organizations with less productive employees. For instance, it's more likely to find OSS on the workstation of a call center employee than on a security trader's desk.

There are some clear lessons that a CTO can learn from our study. OSS is a legitimate technological choice, which is increasingly followed by major US companies. In stable slow-growth environments with a large number of software installations the low purchasing and maintenance cost of OSS can result in savings and thereby increased profitability. Examples include call centers, workstations running just web-based applications, special-purpose platforms, like cash registers and mobile terminals, large server farms, and wide scale deployments of bespoke software with few dependencies on proprietary ecosystems. OSS is not an all or nothing proposition; it can be adopted in a gradual fashion testing the waters for benefits and unknown risks.

One of our study's findings can help the formulation of the Linux community's strategy. This shows that proponents of Linux who try to push OSS from a platform to the desktop may be fighting the wrong war. Organizations are more likely to adopt an OSS operating system if they have already migrated to OSS applications.

Perhaps, the clearest lessons from our study concern the software industry. We showed that in the area of web clients and servers OSS has a large following, and that big companies are increasingly adopting it as they realize its cost benefits in those areas. Software companies that derive a large part of their income from selling standardized products that can be easily replaced by OSS offerings risk seeing their corresponding income stream collapse. Possible remedies include balancing the business between the offering of products and services and moving toward higher-value, more sophisticated, and tighter integrated products, which we have shown to be less likely to be replaced by OSS.

As an OSS contributor and advocate I was startled by the study's results. The paper's findings came to me as an unwelcome surprise. Apparently, the main reason for adopting OSS is lower cost and higher operating efficiencies; OSS appears to be unwelcomed by highly-productive employees and in rapidly growing and volatile organizations. Arguments frequently put forward in favor of OSS regarding its flexibility and the retention of technological know-how were shattered through findings showing exactly the opposite. Organizations that need flexibility choose proprietary software, as do highly-paid employees who could supposedly most benefit by tinkering with OSS to make it fit their needs. Nevertheless, the better knowledge of why and how companies adopt OSS can help us all develop and deploy OSS in the most productive way.