All my friends know that for the past 15 years I've been semi-attached to an HP 100LX palmtop PC (recently updated to a 200LX) for my personal information management and many other tasks. The device is extremely versatile, sturdy, and flexible. Amazingly, after so many years of hard daily use, I still find new applications for it. 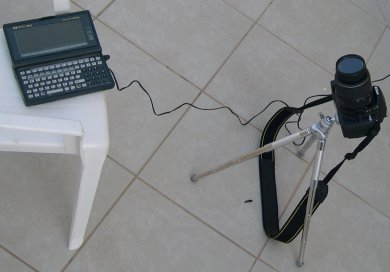 Recently, I wanted to take some long-exposure photographs. in an effort to capture a Perseid meteor. The camera I was using at its "Bulb" setting can only be operated with a remote control. Thanks to Google, I quickly found a description of the remote's infrated output pulses available online. I thought that buying a specialized control just to send 8 infrared pulses to the camera ridiculous, so I set about writing a small program for the 200LX. Running the 16-bit compilers on my current setup was an interesting exercise; at some point I couldn't get the compiler to include a header file, because I had forgotten that the compiler predated long (non 8.3) file names. Amazingly, the first time I pointed the 200LX to the camera and run the program the camera responded with a friendly click.

With my appetite whetted by the success, I quickly expanded the program to allow the specification of the bulb time and the capture of multiple photographs. With these options I could increase my chance of capturing a Perseid by taking tens of photos over the night, and also create time-lapse movies.

Although I had written a universal remote control back in 1997, I felt there were now new things I could try. One of them was replicating the functionality of TV-B-Gone, the infamous remote control that can switch off any TV in its vicinity. Some Google web searching pointed me to the open source unzap application. This includes remote control codes for tens of televisions. I wrote a small Perl script to convert them into C code I could compile for the 200LX, and some time later I was deviously switching off the family's TV. I can't wait to pull this stunt in a place where the TV is annoyingly blasting in the background.

As usual, through this link you can download the source code and executables of these two programs. If you're one of the few devotees still using the t(r)usty HP 100LX/200LX palmtops: have fun!