The form is available on 15 different web sites, including two at academic institutions. It is an Excel version of the standard form used in Greece for making an official statement or request to a state agency or body. The form, like the one below, is widely available in PDF format and also as a Word document. 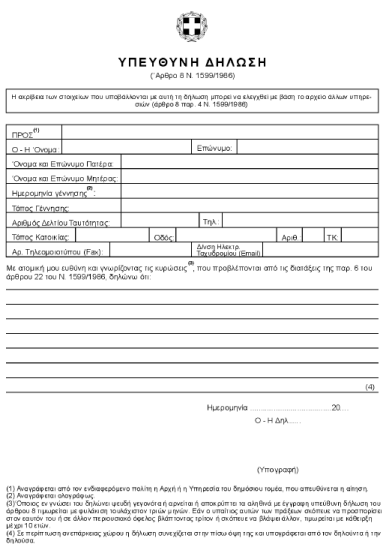 The original (paper-based) form used to have small boxes for filling each letter of the applicant's name and surname. Presumably these were designed to increase the input's legibility, limit its length, and, perhaps, make it easier to type it on a computer.

The bizarre Excel form you see above forces you to type each letter on a separate Excel cell. It also contains an odd statement, advising you to fill-in only the yellow-colored areas.

Now stop reading here, and try to think how one could ever come to the idea of creating such a form.

It turns out that a clever soul thought it would be cute to replicate the paper-based form on a computer, despite the fact that computer-printed output is legible without having to put each letter in a separate box. So he (I somehow doubt it was a she) created a form where you could type your name in the yellow area on the right, and Excel formulas would neatly place the uppercase of each letter in its own cell. See the example below.

Along the way, somebody completely missed the point of both computer-based forms, and the original Excel form's attempt to replicate its hand-written predecessor. He or she (could be both) removed the formulas from the boxes, and painted their area yellow, so one could fill-in the cells one by one.