The Escape of a Small Program

C. A. R. Hoare's Law of Large Programs states that inside every large program is a small program struggling to get out. The parking receipt I got yesterday returning from a SQO-OSS meeting proves this fact. 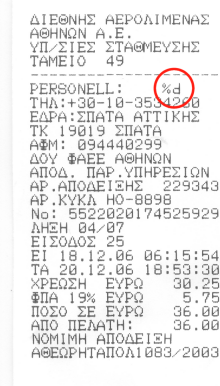 It looks like a printf formatting specification was doubly escaped, or used outside the context of a printf statement. As a result, the "PERSONELL" [sic] value in the receipt contains, instead of an actual value, the printf decimal escape sequence %d . Maybe, because no person is associated with the receipt, the car's plate number is also wrong.

Why do I claim that the two characters "%d" form a small program? If you think of it, the printf formatting specifications are a small, domain-specific language. They allow us to format fixed-width fields, creating report-like output records. Carelessly written printf statements can even be abused by mallicious code to inject abritrary code into a program. Finally, this small and cryptic language has been so successful that it is now part of Java 1.5 in the Formatter class.