Last week I attended NASSCOM's 2006 Quality Summit in Bangalore, India. There I gave a tutorial on tooling with open source software, and delivered a talk on Global Software Development in the FreeBSD Project. It was an edifying trip.

On the first day of my stay my hosts arranged for a visit to Infosys, one of India's biggest IT companies. There we attended a presentation by the company's quality team. The presentation amazed me. For the first time I heard a company follow the best software engineering practices I've been reading about over the last 20 years in a sensible manner. IT companies and professionals often make a travesty of various certifications, by following the letter of a certification and ignoring the spirit. Infosys is CMMI-5 certified, but, surprisingly for a formal process-oriented certification, their CMMI level appears to be an outcome of what they actually practice, rather than the result of jumping some prescribed hoops.

The second thing that amazed me was the company's dynamism. Over the last 8 years, Infosys doubles its revenues every two years, reaching $2 billion in 2006. I was told that the company currently trains 4,500 new recruits every 14 weeks, at its own training campus in Mysore. The average age of the company's employees is 25 years. 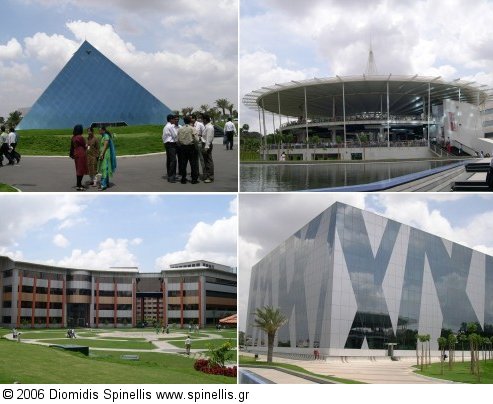 The company's campus at Bangalore was also magnificent; its facilities, buildings, and landscaped grounds could easily be mistaken for the campus of a top US university. Among the 50 buildings were a glass pyramid-shaped multimedia facility housing a private television studio, a large dome-shaped library, auditoriums and lecture halls for continuing education classes, refectories, sports centers, and a bookshop. One moves around mostly by foot, bicycle. We used some futuristic electric cars, but these are probably used only for visitors.

NASSCOM is India's National Association of Software and Service Companies. I've yet to see a body representing the IT sector in another country work with their effectiveness. I was told that the particular summit wasn't one of their largest or most important, yet it was impeccably organized, and some of the presentations wouldn't be out of place at ICSE, the top research-oriented software engineering conference. The organizers managed to have at the summit Paul Nielsen, the director and CEO of Carnegie Mellon's Software Engineering Institute, the current editor of IEEE Software, as well as the former legendary editor, Al Davis, author of the classic 201 Principles of Software Development. All session chairs and participants received a detailed session brief with presentation instructions. Most talks concluded with interesting and lively discussions with the audience; in one case the discussion at the end of the day lasted for more than an hour. Obviously the attendants cared passionately about IT and software quality, and this passion rather than lower costs is I think the driver behind India's phenomenal IT success.