The Efficiency of Java and C++, Revisited

A number of people worked on replicating the results and optimizing the programs I listed in my earlier blog entry.

George Zervas profiled the program, found it was spending a lot of time garbage collecting, and used the -XX:+AggressiveHeap java runtime switch, which, according to its documentation

This option instructs the JVM to push memory use to the limit: the overall heap is more than 3850MB, the allocation area of each thread is 256K, the memory management policy defers collection as long as possible, and (beginning with J2SE 1.3.1_02) some GC activity is done in parallel.

He also used Pentium-specific optimization switches on the C++ code, so he can not be accused of being unfair. George thus managed to bring down the execution time slowdown from 200% to 50%.

The following diagram illustrates the results he obtained: 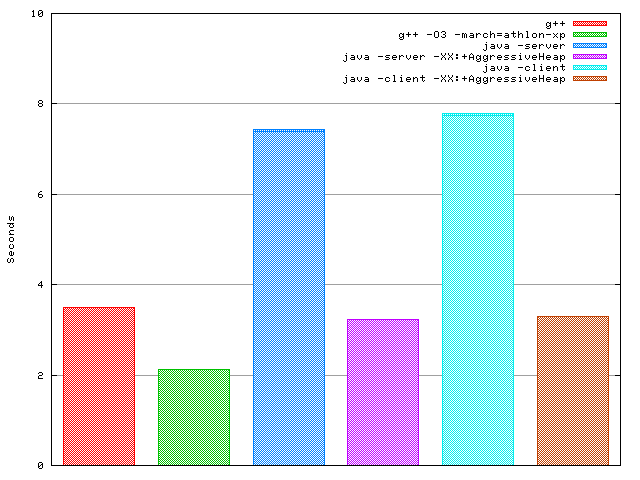 Vassileios Karakoidas, tried a different approach, storing the numbers into an ArrayList, moving them into a native array, and sorting them in place. This brings down the slowdown to 25%.

However, the program does not have the same properties as the original one. Specifically, the invariant of having the numbers sorted at all times is not preserved.

Another optimization I tried involves using native integers or the Integer class in Java. Both appear to be more efficient, but, again, the program differs in the abstraction mechanisms used over its C++ sibling.