Ten Lessons I Learned from Fixing my Laptop's Motherboard

A month ago I managed to break my laptop, by reversing the polarity of a universal power supply. The repair shop diagnosed the problem as a failed motherboard, and asked for €659 to replace it. I found the price preposterous and the notion of throwing away a motherboard for a single failed component ecologically unsound. Here is how I fixed the laptop on my own, and what I learned in the process.

Thankfully, I was quickly able to find a service manual. The trouble shooting guide quickly led me toward the same direction as that of the repair shop: "Replace the motherboard". However, the manual also provided me the exact 28-step sequence for extracting the motherboard. It involved removing more than 40 screws, unseating about a dozen connectors, and separating a similar number of parts.

Lesson 1 Don't attempt to disassemble a laptop without a service guide.

Lesson 2 Keep notes on which screw belongs to which part. Place screws on paper sheets numbered by the step on which you removed them. This will help you reassembling the chaos into one working piece.

Lesson 3 Release connectors before pulling flat cables. Usually you pull a retaining part out or up. Be careful, flat cables and their connectors are very fragile.

Locating the problem on the motherboard proved a lot more difficult. When I was young I remember consumer electronics, like tape recorders, coming with their circuit diagram as part of their documentation. I was fascinated by them. Later those diagrams got relegated to service manuals. The technical reference manual of the original IBM PC contained the detailed circuit diagram of every part. Sadly, all my laptop's service manual offered was a, useless for my purposes, block diagram. 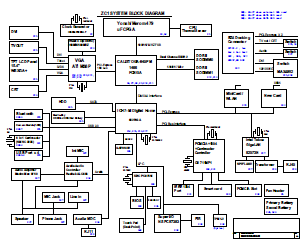 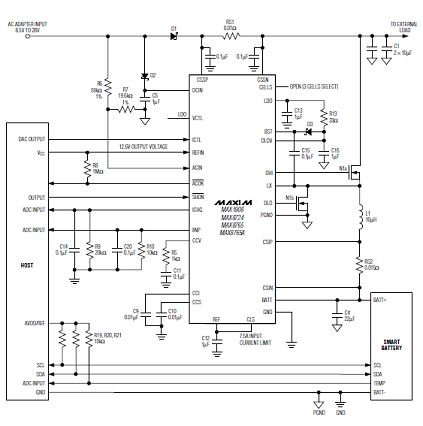 I thus had to resort to other methods. I quickly learned two more lessons.

Lesson 4 Following circuit traces on a modern multi-layer board is a futile exercise.

Lesson 5 You can find component connections by testing logical places for connectivity with a multimeter.

This last strategy proved easy to follow, once I located the key components used for the power supply subsystem: a power supply controller and a battery charger IC made by Maxim. The corresponding data sheets gave me a circuit diagram that was very close to that I saw on the motherboard.

Locating the data sheet for each component on the internet proved invaluable. I thus quickly found out that tens of what looked like eight-pin ICs were in fact MOSFETs packaged with a Schottky diode.

Lesson 7 Data sheets are your friends.

Given that the motherboard was in theory a complete write-off, I decided to test it under power. By measuring voltage at various points, I found that a diode that was supposed to supply the battery charging controller, was broken. When I short-circuited the diode and found voltage at various other motherboard locations that were previously dead, I was sure I had located the culprit.

Lesson 8 To locate a fault be prepared to work top-down (from subsystems to components), or bottom-up (look for a faulty component), or to start from the fault's reason (e.g. reversed polarity), or its symptom (e.g. lack of power). 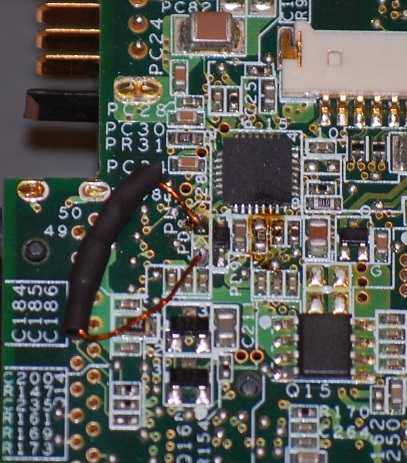 Fixing the problem on a dense board of surface-mounted components wasn't however trivial. Fortunately, finding a replacement part was easy. According to the application note I could use a simple signal diode, so I just pulled a 1N4148 diode out of my component drawer. To fit it on the circuit board, I soldered thin insulated solid copper wire at its two ends, and placed the package in a heat-shrink tube. This allowed me to place the package nearby, and solder the two ends on the pads left by removing the original diode that had failed.

Lesson 9 For the fix you'll have to improvise and make concessions. The tools of your trade are a very small soldering iron, a magnifying glass, thin wire-wrap cable, and insulation materials.

The fix proved correct, and some time later I was happily using my newly revived laptop.